This installment of our Big Picture series zooms in on Silicon Valley.

As the 2010’s enters its second half, something curious is going on between tech and art, in the oft-proclaimed “innovation capital”.

On the one hand, angry protests from San Francisco’s art community, against the new monied tech elites driving up real estate prices and edging out artists and other creatives, are still ringing in the ear. A personal anecdote (other than the fact that non-artist regular people like myself can hardly afford housing here too): just yesterday I was calling a string of art supply stores for a gift I’m planning on buying for a friend in China, only to find out that half of them have moved from their previously listed locations – the one in downtown Palo Alto has moved to Redwood City, after losing its lease to a “social networking company”; the one in San Francisco is in the process of moving to Oakland, vacating space for a condo development (perhaps  targeting employees of that social networking company). All-too-familiar stories, about the exodus of art.

On the other hand, Spring of 2016 here is seeing an influx of impressive art projects, with a series of heavy-hitting events between San Francisco and Palo Alto. The eagerly-awaited new San Francisco Museum of Modern Art, now the biggest modern art museum in the U.S., will have its grand debut next weekend, tickets long sold-out. In its bright, spacious and beautiful new wing with exterior evoking the waters of the Bay, the museum now boasts 1,100 works promised from the collection of Doris and Donald Fisher, founders of The Gap, Inc, among them creations by such greats as Chuck Close, Joan Mitchell, Cy Twombly, and Andy Warhol. A few days later, Gagosian Gallery will be opening across the street, the 16th worldwide location of the famed mega-gallery.

These inaugurations follow two other recent events closely watched by the art world – the openings of Minnesota Street Project and Pace Gallery. Both directly related to technology, either in terms of the backers or of the programming, they are the featured subjects in this part of our series. Combining excerpts from other coverage with our own observations, today’s post examines the awkward, transitioning — yet potentially dynamite! — relationship between art and technology that we see emerging in the Bay Area. 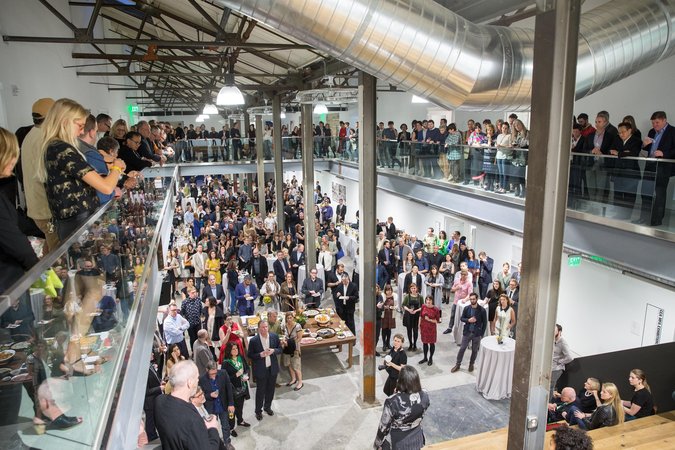 The crowd at the Minnesota Street Project’s grand opening

In March, veteran venture capitalist Andy Rappaport and his philanthropist / art benefactor wife Deborah Rappaport unveiled their Minnesota Street Project, a visionary mixed-use plant for San Francisco’s artists, galleries, and nonprofits, in the City’s historic Dogpatch District. Providing this community with state-of-the-art facilities at affordable rent, but using a for-profit model with deliberate analysis of a seasoned investor, the power couple, with ties to both Silicon Valley and the art world, seeks to “bring them together in a way that proves mutually beneficial—basically, by creating an environment with proper set of circumstances for these two prickly species to mate.”

With perspectives and insights into both worlds, Andy Rappaport gave a thoughtful interview with Artspace, excerpted below, sharing his view on why art is urgently relevant to tech people, how as a society we arrived at art deficiency, how everyone can learn to appreciate art, and how artists and entrepreneurs, very much alike with each other, can mutually benefit.

How the Art World Can Win in Silicon Valley: A Q&A With Minnesota Street Project Founder Andy Rappaport
By Andrew M. Goldstein for Artspace

“Even though we live in an increasingly virtualized environment, people really do need to gather, and they want to have a sense of place—this is something I learned through my experience in the tech world.”

“It’s absolutely true that the per capita consumption of and interest in the visual arts in the tech community right now is lower than other major communities of influence in the Bay Area and elsewhere. There are a couple of interesting reasons for that. For one, there’s been an increasing chasm that’s developed between arts education and technology education. For my generation—I’m in my late fifties—arts education was something that was integrated into the primary- and secondary-school curriculum, and there was plenty of money for it, so future entrepreneurs like me who went through the better schools, and even the not-so-great schools, got a fair amount of arts education.

Unfortunately, over the last 30 years, as schools everywhere have been challenged financially, arts education—which is viewed as somewhat less productive in terms of preparing people for careers—has been diminished, sometimes to the point of disappearing. As a result, there are several generations who have grown up without as much exposure to art in school, and art is a bit like a language, in that if you don’t learn it early on it can be hard to relate to later.

At the same time, the technical curricula has become increasingly robust and packed. The pace of technology’s expansion over the last 30 years has been extraordinary, and a lot of the stuff that you used to only encounter in grad school is now being taught in junior high. But people who study technology and want to be great technologists have a curriculum ahead of them that is so packed that it really crowds out a lot of other stuff. …

What do you do about that? Our notion is really simple. My wife Deborah loves to say, ‘Nobody’s born knowing how to appreciate an art exhibit.’ It’s something you have to learn, and if it’s something you had never paid attention to before and don’t understand, and if it looks threatening, then maybe you feel you shouldn’t bother. And I think, unfortunately, that there’s a current running through the art world that doesn’t necessarily invite or encourage people who are just starting to appreciate what they’re seeing.

Instead we want them to realize, ‘Hey, art is a wonderful thing, and people take away what they bring to it, and they learn as they go.’ That’s how Deborah and I have learned about art. Neither of us grew up with art in our families, really, and neither of us studied art. It’s just something that we learned to appreciate over time.

The second part to this is we want to build programming that puts art in the broader context of creative processes. The ways that artists make art are not entirely dissimilar from the creative processes that entrepreneurs undertake, or engineers, or musicians, or writers.

One of the things that Deborah and I are trying to figure out is how we can get tech entrepreneurs to recognize that, actually, when they meet artists, they’re meeting people who are in many ways like themselves.” 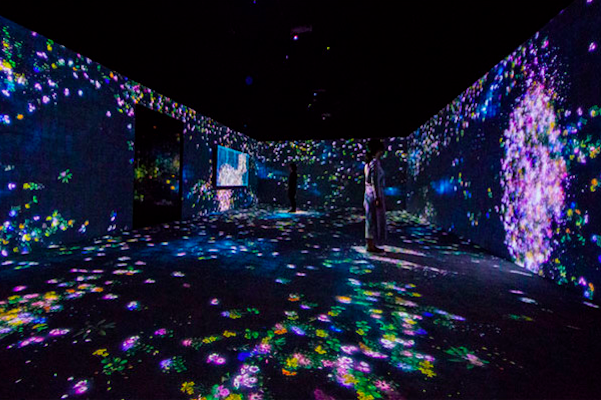 above: Flutter of Butterflies Beyond Borders.  (Courtesy of TeamLab and Pace Gallery) 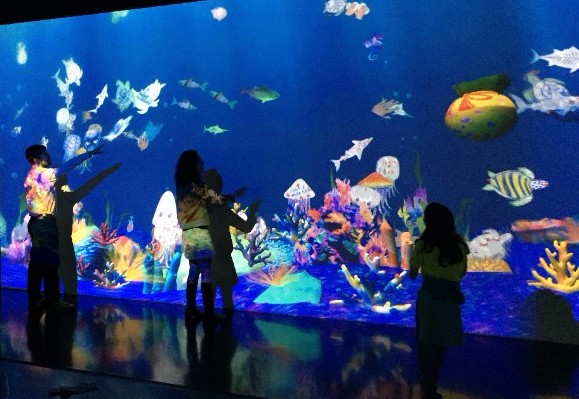 Sketch Acquarium, of sea creatures made from drawings by children

This Guardian article told the background story of Pace’s physical entry into this market, upon the Menlo Park opening:

The ‘cultural desert’ of Silicon Valley finally gets its first serious art gallery.
By Nellie Bowles

“Silicon Valley got its first major contemporary art gallery this week because Laura Arrillaga Andreessen – prolific art collector and heir to local real estate baron John Arrillaga [and, by the way, wife of Marc Andreessen] – decided it was a little weird to have art sales in her house.”

[Explained Marc Glimcher, Pace Gallery Owner] “In the beginning, Laura Arrillaga wouldn’t travel, so I would bring art to her house, and then her friends started wanting me to bring them art too. And she said, ‘you know, it’s a little tacky to be doing this in my house, why don’t you use my dad’s old run down Tesla shop?’

A Tesla building could only be considered ‘old’ in Silicon Valley.”

The Peninsula openings have been part of Pace’s methodical moves to test, learn and develop the Silicon Valley market. If the Menlo Park pop-up was a test, they should be very pleased by the results: 45,000 people visited in 3 months to experience teamLab’s immersive installations.  (This exhibition runs till July 1st. This 7×7 article describes the show in more detail. One of the works designed for children, Sketch Acquarium, was previously featured on our website.) 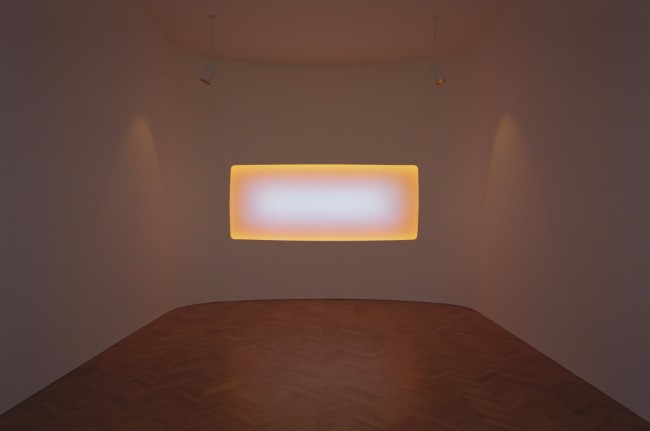 Some readers objected to the Guardian article’s notion of Pace being the “first”, citing existing galleries in the area, even when qualifiers such as “serious” are considered. Perhaps the definition of “first” is debatable, but the qualification of “serious” was certainly further validated by the scene at Pace’s follow-on opening of its permanent Palo Alto gallery.

People lined up around the block to get in. Had I known the supposedly 20 minute queue would turn into 1.5 hours, I would not have waited, especially in the chilly wind that evening. Irritating as it was, though, I was also amused – clearly folks in or near Palo Alto line up not just for cookie-sandwiched ice cream (why???) or sushi tapas, but also for art. I asked one of my nearest queue-mates – “Do you know James Turrell?” “Not really.” She shrugged. But she stood in line anyway, similarly shivering in the wind. Either people are so trustful of Pace to think that anything they put on must be good. Or people are just so parched for culture here. At the moment the only other cultural institution in downtown Palo Alto, a town swimming in money, is Stanford Theatre, which has had many near-death experiences. Granted, folks standing in line might not be Pace’s target audience of real art-collectors – more glamorous-looking VIPs were dropped off at the door and ushered in right-away, bypassing the queue – but Pace Gallery owner  Marc Glimcher could be right that there is an “unmet need” here.

I chose to live in Silicon Valley after graduate school, and it’s now been 20+ years. There are so many great things about this area but there has always been something missing. Culture. “Desert” maybe a harsh word – there are a few little patches of oases here and there – but it’s certainly no Florence. A Pace Gallery (or two) doesn’t necessarily change much – I cannot afford their art anyway – but art should neither be the province of starving artists, nor the exclusive property of the uber rich.  There is plenty of space, resources, and arguably need and appetite for more culture here in one of the world’s most wealthy, highly-educated and nature-blessed areas, for non-high-flying, non-financiers and non-technologists like me.

Speaking of Florence, I suggest we now  take a break from figuring out the contemporary, and refresh ourselves with a leisurely travel back in history, to a time and place (or rather, times and places) where art, science, technology and philosophy flourished naturally together, when art was more an integral part of everyday life, and the making of things.

Next issue:
IV- How about a 21st Century Florence? Or for that matter, a new Hangzhou?