The Moment of Pi, and Arts of Infinity

At 9:26am this Saturday, take a moment to pause from your bike ride, lazy cup of coffee, dog-walking in the park, or whatever you will be doing for the weekend morning.

It will be a special moment that comes only once in a century:

when the date and time digits match those of Pi, π, that mathematical constant expressing the ratio of a circle’s circumference to its diameter, an irrational number that goes on forever.

While Pi Day has been celebrated on March 14 for 27 years, in honor of this mysterious number, the Pi Day this year is the most accurate of the entire 21st Century, an occurrence that will not roll around again until March 14, (21)15.
Although PI Day is not mainstream enough for merchants to have blasted promotions at you for two months, festivities are popping up around America on college campuses, at museums or other public venues to commemorate the occasion. March 14th being also Albert Einstein’s birthday, math and science lovers have even more reasons to spend this weekend in exuberance.

If you are not geeky enough to have planned on participating in such festivities, and are now at a loss for how to revel in this unique moment, I offer you the company of something quieter and more intimate; something sweet and beautiful, which you might appreciate for your children or for yourself.

Some Pi arts, and two stories of the creators behind them.

FIRST, FOR YOUR CHILDREN

Erica is a “life-long theatre geek”, Ph.D.-holding California native, who now lives in New York City with her husband and two “rowdy, intelligent” boys. Like his younger brother, Kiddo loves math but resists art. To encourage more creative, well-rounded learning, Erica came up with various math art projects that get math kids to make art and art kids to enjoy math. The solution has successfully engaged Kiddo, and he has created a series of art works exploring concepts such as number sequences, shapes and symmetry, or using math tools such as the ruler, compass and protractor.

And here are other math arts they have done together, including Fibonacci art, tessellations, and parabolic curves.

On her blog WhatDoWeDoAllDay, Erica explains how she coaches her son on these projects, as well as with a myriad of other learning tools.

Think this math art stuff is only relevant for your school-age children, whereas you as a grownup are past the age of mathematics, or art? Then meet Cano.

In my world, in and out of Silicon Valley, someone who can be described as an “engineer, entrepreneur and philanthropist” are not uncommon. However, adding “artist” into the mix, it becomes a rarer find.  Cano Ozgener is one such combination, who lives in Nashville, TN.  A native of Turkey with an M.S. degree in Mechanical Engineering from Columbia University, he taught algebra and thermodynamics at New York Institute of Technology, worked for DuPont R&D, and ran a series of his own ventures importing, manufacturing and selling pipes and humidors after settling down in Nashville with his wife and having two children. 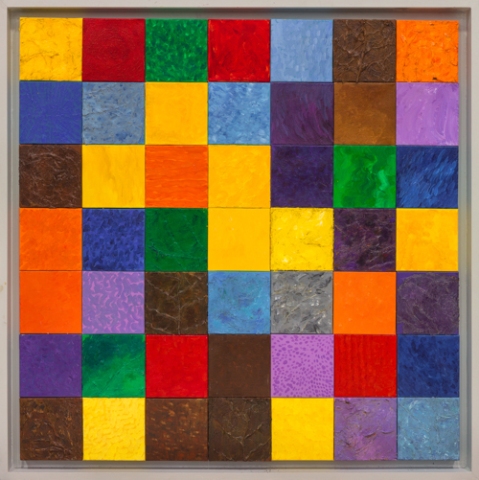 At age 70, he became an artist. “Life made me an artist”, he says.  He was referring not to the successful life he and his wife built together as immigrants in America, although that would certainly have a lot to do with it too; but to the decade-long struggles with illnesses and pain, starting with the deadliest stage of non-Hodgkin’s lymphoma in 2002, treated but then relapsed; followed by a profoundly difficult stem-cell transplant; then an open-heart surgery with aortic valve replacement and three bypasses in 2011.

“Fighting for your existence can drive you deep down to the bottom of your soul, where the truth of ‘to be or not to be’ will find you. There you will also find art—all kinds of art! And you can also find the truth that art will invigorate your soul and help your physical and mental fight.”

For Cano, art made a difference between life and death. Having survived the physical challenges and regained strength through art, he decided to give back through the arts. He and his wife founded OZ Arts Nashville, a non-profit contemporary performing and visual arts venue, in 2012. It had its first performance in 2014, to a sold out audience. 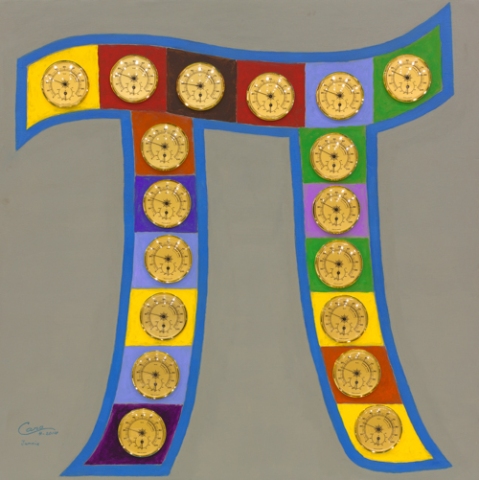 With that background and life story, it comes as no surprise that Cano would be fascinated by the number Pi, and would now turn that fascination into artistic expressions of infinite possibilities. In a series titled Pi Synesthesia, he combines this never-ending number with chakra or rainbow colors, which he then makes into murals, paintings and pendants.   Also evident in these works are his Turkish heritage, love for meerschaum pipes, and long practice in yoga. OZ Arts’ new “PI Day 3.1415 Program”, unveiled just in time for the occasion, will exhibit Pi Synesthesia and works from other artists who share a passion for both mathematics and art.  (See more Pi Synesthesia pieces on Art & Science, or on http://canoozgener.com/.)

Kiddo and Cano. At the beginning of life and making new beginnings. Very different stories, but each with their own infinite possibilities.

I hope their arts and their stories help make your 3.14 moment special, by inspiring new ideas, new revelations and new possibilities.

Then at 9:26pm, you will have a perfect excuse for a yummy piece of pie, even if it doesn’t quite look like this: 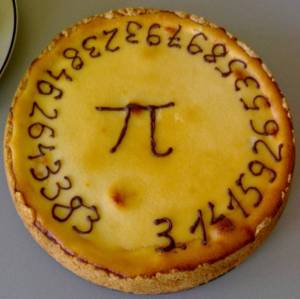 Happy Pi Day of the Century!

You are currently reading The Moment of Pi, and Arts of Infinity at .